Orto RNIDS is a new Cyrillic typeface created primarily for on-screen display, a gift from the Serbian National Internet Domain Name Registry Foundation (RNIDS) to Internet users, which can be downloaded for free from our site, rnids.rs. This is the second Cyrillic typeface that RNIDS has supported the creation of, in partnership with the organisation Tipometar. The new fonts are being made available to mark the ninth anniversary of the beginning of registrations of Cyrillic .срб domains. 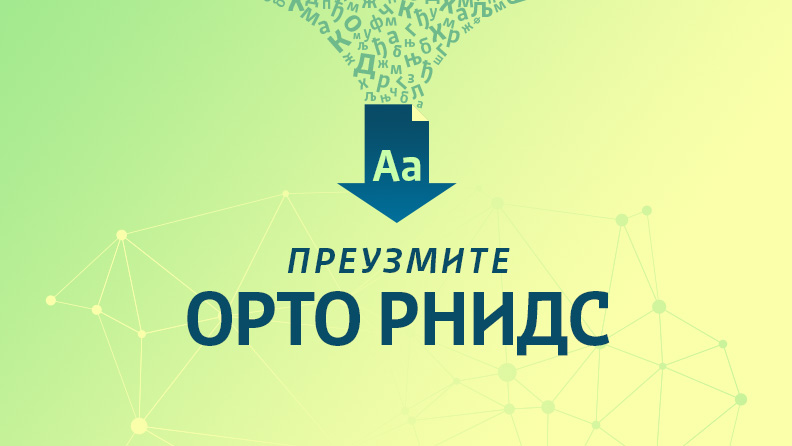 Unlike the Areal RNIDS typeface, presented in January 2020, which is a slab serif typeface, Orto RNIDS is in a sans serif humanist style. Within the typeface there are upright and italic fonts, each in two weights. It was created with the idea that the shapes of the characters would be well suited to on-screen display but perform well in print, too. The author of the Orto RNIDS typeface is Ana Prodanović, assistant professor at the Belgrade Faculty of Applied Arts.

The new typeface was presented at an online event called Cyrillic in the Digital World, with its author, Ana Prodanović, giving a talk about the process of creating fonts, where the inspiration for them comes from and their everyday usage. Following this the audience had an opportunity to hear Dr Svetlana Slijepčević Bjelivuk, research associate at the SANU (Serbian Academy of Sciences and Arts) Institute for the Serbian Language talk about the culture of language and the use of the Serbian language online.

The event ended with a panel moderated by Zoran Stanojević, editor of the RTS (Serbian state broadcasting corporation) Internet portal, with participants discussing the status of Cyrillic in the digital world. The panel talked about the use of Cyrillic in brand identity design to be used in communication both online and off. They touched on the topic of websites which not only had content in Cyrillic but also had links in Cyrillic and were on .срб domains, the participants agreeing that the matter of using Cyrillic boiled down to our decision to do so, since there were no insurmountable technical or communication obstacles, as long as we wanted to overcome them. Panel participants were: Igor Adamović, Creative Director, Control Creative, Vladimir Marić, Director of software company Mrežni Sistemi, Petar Slović, Innovations Director, Quantox Technology, and Jovan Turanjanin, author of the Ćirilizator transcription software.

A recording of the Cyrillic in the Digital World event is available on the RNIDS YouTube Channel.