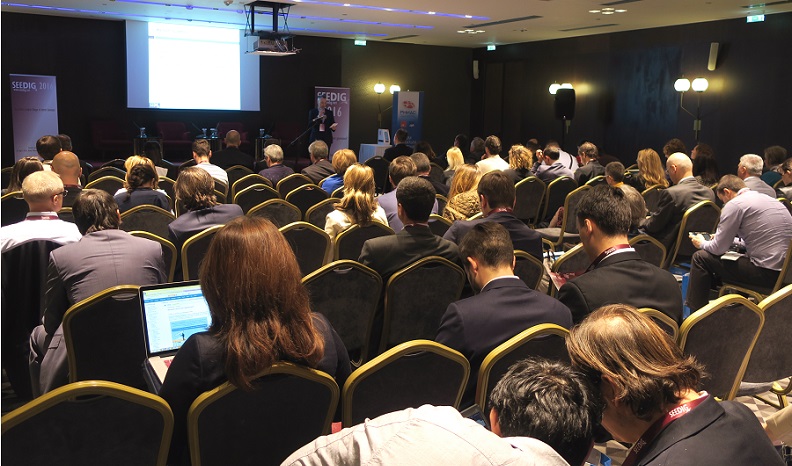 Belgrade’s Metropol Palace Hotel was the venue on 22nd April for the second regional event relating to the South Eastern European Dialogue on Internet Governance – SEEDIG 2016. Host of the event was RNIDS – the Serbian National Internet Domain Registry, in partnership with local institutions the Ministry of Trade, Tourism and Telecommunications and the Directorate for eGovernment of the Ministry of State Administration and Local Self-Government. The event was held with the support of numerous international institutions (the Council of Europe, the European Commission, IGF, IGFSA, ICANN, ISOC, RIPE, EuroDIG), and also sponsored by international and local Internet companies (Afilias, Serbian OpenExchange, SBB and Stanco).

More than 50 Internet experts from the region of south eastern Europe took part in organising the event, united around an initiative for dialogue regarding the specific regional challenges regarding Internet governance faced in this part of Europe. This SEEDIG was the second such event (SEEDIG 2015 was held in Sofia), and this initiative is part of the IGF (Internet Governance Forum), established by the United Nations as a model for global dialogue between all stakeholders involved in the governance of the Internet. SEEDIG is also part of EuroDIG-a, an IGF initiative for dialogue on Internet governance at the European level.

The meeting was titled Can we SEE Internet Governance, with a four-part programme addressing the major topics relating to Internet governance. Although each part had its keynote participants, they were there only to set the stage for a fruitful debate with the public, both those present in the venue and those watching the event via the Internet. Around 120 delegates were present from countries in the region (Serbia, Romania, Macedonia, Croatia, Slovenia, Bosnia and Herzegovina, Bulgaria, Albania and Moldova) as well as from countries in the broader region (Armenia, Georgia, Ukraine, Russia).

The first panel discussion addressed Internet governance in the region, and sought to answer the question of who governed the Internet in our region. Speakers were Andrea Beccalli (ICANN), Chris Buckridge (RIPE NCC), Frédéric Donck (ISOC) and Markus Kummer (IGFSA). After the panel participants had presented the experience of their organisations in the governance of the Internet, the session was turned over to live dialogue with the audience in the attempt to define best practice in the region. At the end of the session, as is customary at these events, key messages were presented encompassing the complete range of problems, opinions were laid out and best practice examples given of how the Internet should be governed in our region.

The second panel debate focused on the digital divide and digital literacy in the region. Speakers were Valentin Negoita (APDETIC, Romania), Megan Richards, (European Commission), Vojislav Rodić (RNIDS, Serbia) and Jan Žorž (ISOC, Slovenia). After a presentation of EU projects in this area that could potentially benefit all countries in the region, a discussion was initiated on the topics of digital literacy, varying Internet access speeds in the countries of the region, the connection of users to the Internet in rural areas and even technical topics such as IPv6 and IDN.

The third discussion was one of the best-attended, addressing a hot topic both worldwide and in Serbia – information security. Panel guests were Axel Pawlik (RIPE NCC), Désirée Miloshevic (Afilias) and Milan Sekuloski (DCAF). The panel debate quickly turned into a lively discussion, with many issues raised relating to this topic.

The fourth debate was concerned with human rights on the Internet. First, delegates heard two excellent presentations from Patrick Penninckx (Council of Europe) and Nevena Ružić (from the office of the Commissioner for Information of Public Importance and Personal Data Protection, Serbia), after which the audience was divided into several groups in order to brainstorm which online human rights in our region were significant, and possibly under threat.

In addition to these discussions, several separate, smaller sessions were held to present some of the major projects in the area of Internet governance in the region (www.seedig.net/seedig-2016-short-talks/).

At the close of the programme, Wolf Ludwig (EuroDIG) and Chengetai Masango (IGF), each in their own way, praised the efforts of the SEEDIG Executive Committee in organising the event and expressed their support for the further development of this initiative.

Shortly prior to the event, the SEEDIG Executive Committee published the results of a survey conducted in the region (www.seedig.net/seedig-survey/) giving a very important overview of the state of affairs on the Internet in our region.