Internationalized Domain Names (IDNs) are domains that can contain letters in their name that are not limited to the English alphabet (i.e. the ASCII character set). This includes, for example, Latin letters with diacritics, such as č, ć, š, ž and đ. In supporting the aforementioned characters, and an additional 36 from the Albanian, Ashkali, Bosnian, Bunjevac, Croatian, Czech, German, Hungarian, Montenegrin, Polish, Roman, Romanian, Slovak, Slovene and Vlach languages, the .RS domain joined on December 10th 2018 the great global family of IDN TLDs. 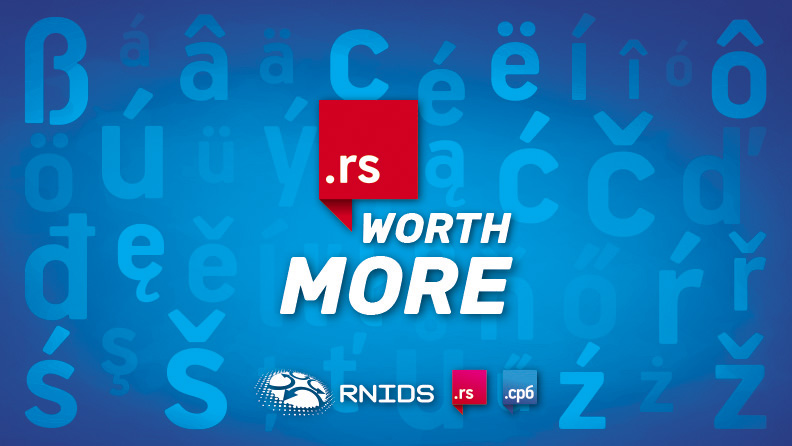 RNIDS’ registration fees for .RS IDNs are the same as the fees for registration of the corresponding .RS domain in all domain spaces (.RS, .CO.RS, .ORG.RS, .EDU.RS, .IN.RS).

A short history of IDN domains

There is a global commitment to multilinguality on the Internet. The concept of IDNs first emerged online in 1996, and in 2000 registration of IDNs was enabled within the .COM and .NET domains. Only a year later, ccTLDs began registrations of IDNs, among the first of which was the Japanese .JP domain. In 2003, ICANN, the organisation that manages the global structure of the Internet, approved the IDN standard, and the same year, at the 32nd session of the General Conference of UNESCO in Paris, a recommendation was passed which among other things advocated the promotion and equal use of different languages and scripts on the Internet. In 2003 the first European national registries – the Polish and the Swedish – began registering IDNs. In 2004 they were followed by the Austrian, Swiss, German, Danish, Hungarian, Icelandic, Italian, Latvian and Norwegian registries. Thus the Internet entered a new multilingual era.

Every nation aspires to use its own script on the Internet, not just within content but also within the domain name. RNIDS has kept up with global trends, in 2012 facilitating registrations of Cyrillic domains within the .СРБ domain. Now the .RS domain is opened up to the broader set of Latin characters used in the Republic of Serbia.