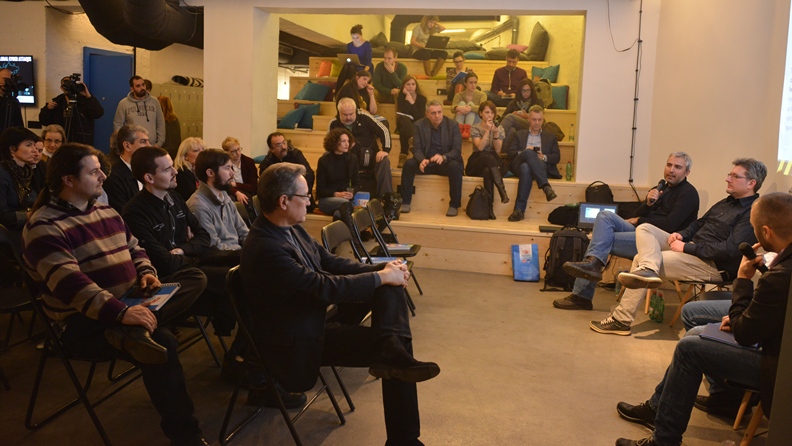 A number of myths about the use of Cyrillic on the Internet – for example that Google “doesn't like” our official script, that there are not enough Cyrillic fonts, that using Cyrillic makes it difficult to expand one’s online business and other beliefs – were put to rest on 27th January 2016 at a panel debate entitled: Cyribusters, held at the Startit Center and organized by the Serbian National Internet Domain Registry (RNIDS).

At the panel discussion led by multimedia creator Uroš Bogdanović, Ivan Rečević, a trainer at the Google Academy, debunked this first myth. According to him, in our area Google gives priority to searches in the Cyrillic script, but the content has to be adequately described in order for Google to know which language and script is being used, of which, in practice, there isn’t enough of. Specifically, the code of a web page should define the language in which it is written, whether it is Cyrillic or Serbian Latin (letters with diacritical marks), which the majority of Serbian sites do not do.

"Google is a piece of large and complex machinery. Everyone who can help that machinery to understand and to locate content will be rewarded with a better search position. This means that it would be worthwhile for companies and the media to define which language they are addressing the internet community with.", said Rečević.

The Cyrillic script is widespread throughout a large part of the world’s population and so there are many Cyrillic fonts, claims Bojan Stefanović, a graphic designer from Logoholik who specializes in logos. However, there are some particular graphic problems for Cyrillic users, such as irregular italic characters, but according to Stefanović there are many people working on resolving this issue and good Cyrillic fonts can be found on many sites, from which he singled out Tipometar.

"I’ve noticed an increasing number of companies wanting to use Cyrillic, and that’s a good thing for a variety of reasons. Apart from preserving our official script, companies can thus also stand out from the crowd in the market of international brands that are synonymous with globalization," added Stefanović. Furthermore, companies that have logos in Cyrillic but also would like to pursue exports can easily have two logos – one in the Cyrillic script and one in Latin.

When you type the term "domaće kiflice" (a common type of local bread rolls) into Google in either of these scripts, the result you get is a company with that name. Miloš Mijić, owner of the brand Domaće Kiflice, decided to have his logo written in Cyrillic in order to differentiate himself from the masses and thus attract the attention of consumers. It is obviously this, along with the quality of his product, that has helped him transform a small family business he started with his wife into a company that now employs thirty people.

The logo and communication they use to promote themselves on social media are in Cyrillic, but the site uses the Latin script. This is why they are currently in the process of transliterating the contents of the site into Cyrillic.

The participants in the panel debate agreed with Mijić that this is not a complicated process, and stressed that nowadays, with the help of plugins for the most well-known and frequently used CMSs, it is possible to automatically transliterate content from the Cyrillic script to Latin and vice versa. It only takes a few minutes to download and install these plugins.

Domaće Kiflice, the brand we have already mentioned, communicates via Twitter and Facebook with its clients and consumers in the Cyrillic script. This is an available and desirable option, says Ivan Rečević, because some social networks analyze content and assign it a language component, so often our Latin script (with diactritics) is given Croatian or Bosnian “citizenship”.

Additionally, social networks have long made it clear that they respect various scripts, so that now everyone on Facebook can have a user name, interface and posts in Cyrillic, and even Cyrillic hashtags.

Cyrillic is poorly represented in the content of Internet sites

Russian Cyrillic has long been the most common script on the Internet after the English alphabet. Predrag Milićević, Chief Marketing and Business Development Officer of RNIDS, explains that there are some technical problems with creating email addresses with this script, but that’s a problem not just for Cyrillic, but also for all other scripts that don’t fall under the English alphabet (Chinese, Hindi and Arabic scripts, and also French, German and other Latin scripts that have letters with diacritics). These problems are being comprehensively addressed on a global level, and the solution will involve all non-English scripts, our Cyrillic script included.

"In spite of this, the Russians, for example, have registered over 860,000 of their own Cyrillic domains, but unlike us, the Russians don’t have two scripts. In that country, Cyrillic is used exclusively. Additionally, their market is very homogeneous, which is why something like that is possible. I found some information somewhere that Russians produce as much as 70% of their ‘cultural products’, from movies to music, and only 30% is imported. With that kind of market, it’s only natural that Cyrillic would be so widely represented on the Internet," said Milićević.

It is estimated that the ratio of Latin script to Cyrillic in the Serbian market is 70:30. The question remains of whether or not the Internet can be at the forefront for change regarding the Cyrillic script if we are not able to do so ourselves "offline."

In addition to the discussion about these entrenched myths, a conversation about prejudices also came up during last night’s panel discussion. Namely, in Serbia many associate the Cyrillic script with nationalism and xenophobia, which, according to the meeting’s participants, is an unfounded notion.  Cyrillic is a Serbian script and has been in widespread use in our country (with certain modifications) since the 11th century, so it should be associated exclusively with the Serbian language, and not with religion or politics.