The Serbian National Internet Domain Name Registry Foundation (RNIDS), in partnership with the DiploFoundation and the Internet Society, co-hosted the largest European conference devoted to Internet governance policy development – EuroDIG 2021 – and facilitated its broadcast from a studio in Belgrade. 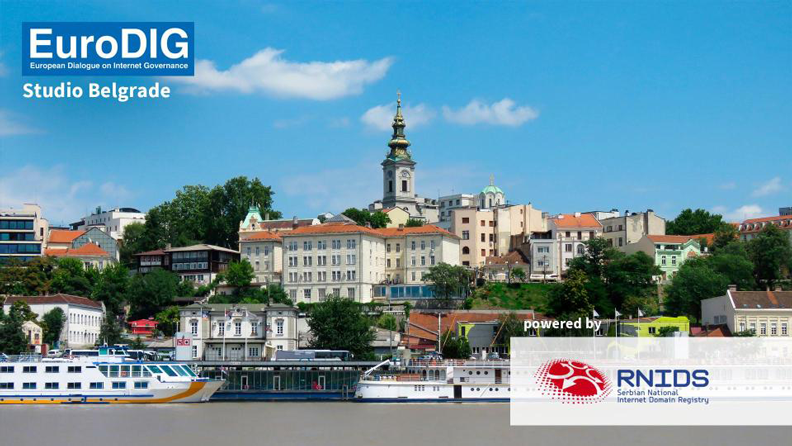 The conference was declared open in the Belgrade studio by Minister of Trade, Tourism and Telecommunications, Tatjana Matić, who expressed great honor at the fact that Serbia was able to stand together in this endeavor with partners like European Commission, Council of Europe, ICANN, European Broadcasting Union, and certainly the Serbian National Internet Domain Registry, DiploFoundation and Internet Society that are behind Belgrade studio this year.

Over the three-day virtual conference, the slogan of which this year was Into Europe’s Digital Decade, the audience had a chance to hear, via the programme broadcast from the Belgrade studio, talks and panel discussions on the topics of IoT technologies, security, rights and principles in the online environment, regulation of digital services, data protection in the context of artificial intelligence, human and algorithmic bias in decision-making, fake news and media literacy, best practices in the self-regulation and co-regulation of online platforms, user perspective and the implementation of 5G technologies as well as competition in the digital system in Europe and further afield.

In addition to the Belgrade studio, the programme was broadcast from studios in Trieste and Bruges, while the conference brought together, both as participants and audience members, representatives from major European and global institutions (UNESCO, the European Commission and the European Parliament), universities and academic institutions, tech companies (Google, Facebook, Huawei and more) and the domain community (ICANN, CENTR and European ccTLDs).

Recordings of the panels and talks that comprised the packed schedule of this year’s conference can be seen on the EuroDIG YouTube channel, and key messages and conclusions will be available on the organiser's website.