What is the role of the ccNSO in relation to Universal Acceptance and should this ICANN body become more actively involved in the discussion? This was the topic of a session chaired by Dejan Đukić, Director of the Serbian National Internet Domain Registry Foundation (RNIDS), during the ICANN 75 annual general meeting. Another of the panelists was Dušan Stojičević, member of the RNIDS Board of Governors, representing the company Gransy, with Žarko Kecić, RNIDS Chief Technical Officer also taking part from the audience. 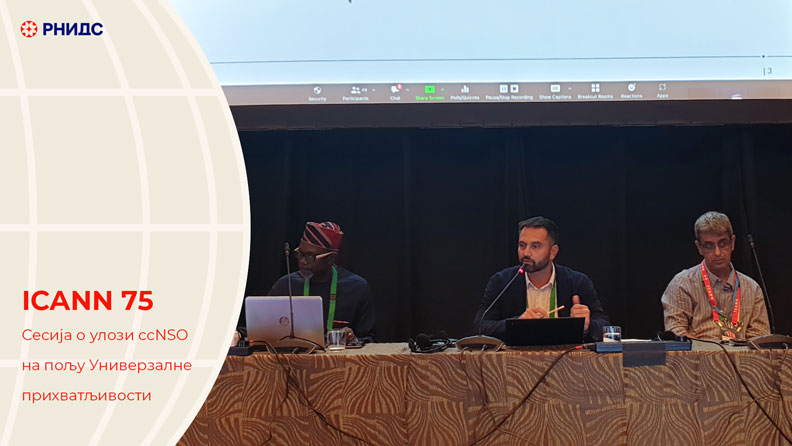 Dejan Đukić has for some years been actively involved in the work of the ccNSO (Country Code Names Supporting Organization), an ICANN (Internet Corporation for Assigned Names and Numbers) body, and during ICANN 75 took on the responsibility of chairing the panel tasked with learning what the community, and in particular ccTLDs (country code top-level domains), expect of the ccNSO in terms of the assistance this body can provide to national registries relating to Universal Acceptance.

This session resulted from an initiative on the part of ccTLDs and the broader community under the ICANN umbrella, for the ccNSO to take on a more active role, especially in encouraging ccTLDs to get involved in local and regional initiatives, which are of huge importance in determining the global approach towards Universal Acceptance.

Đukić gave an introduction to the session, moderated the discussion and summarised it afterwards. Session participants were representatives of the registries for the .th, .in, .ng, Dot.Asia domains, as well as Dušan Stojičević, who shared recommendations about how the ccNSO could make it easier for ccTLDs to implement and promote the use of internationalised domain names (IDNs).

ICANN 75 was held from 17th to 22th September in Kuala Lumpur, Malaysia.