Home / Domains / Cyrillic on the Internet

What is a .СРБ domain?

The Cyrillic Internet domain .СРБ is the second country code top-level domain of the Republic of Serbia. It is part of the internationalised domain name (IDN) family – domain names which are not written using the English alphabet. After the Russian .РФ domain it was the second Cyrillic Internet domain in the world to be opened for registrations, beginning 27th January 2012. As of March 5th 2019 registration of .СРБ domain names is enabled for the broader set of Cyrillic characters, which incorporates letters from Bulgarian, Macedonian, Montenegrin, Russian, Ruthenian and Ukrainian languages. 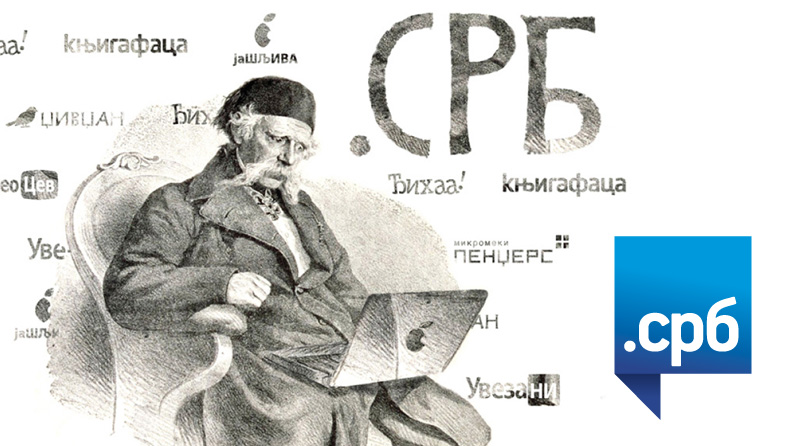 The .СРБ domain designates a website as containing content primarily intended for that territory. Internet searches are to a significant degree based on geolocation, and Google will prioritise websites on the .СРБ (and .RS) domain, and in the Serbian language, when anyone is searching for information from Serbia. This means that such content reaches Internet users in Serbia more easily, but also users living abroad who are interested in products or services from Serbia. In addition, Google considers Cyrillic to be the only official script of the Serbian language and very effectively searches for keywords in Serbian, in Cyrillic.

National Internet domains provide a higher level of reliability and security, making misuse more difficult. Unlike .COM and many other generic domains, national Internet domain names cannot be registered by unidentified companies or individuals, which makes them more reliable and secure, while site visitors can easily check who is behind the domain the site is hosted on. Additionally, registrants of .RS and .СРБ domains can protect their domain names in as many as three different ways, preventing cyber criminals taking control over them.

A .СРБ domain is indicative of a company’s presence in the Serbian market. Choosing a national Internet domain impacts the visitor’s perception of the site since it sends the message that the company has an online presence in the Serbian language and script, with prices in the local currency and a range of products or services targeted specifically at Serbia, that it has created a range that fits in with local customs and local purchasing power, that it offers discounts and promotions to mark local holidays, etc.

.СРБ is the only Internet domain in the world that allows web addresses to be written exactly as they are pronounced. Serbian Cyrillic is one of the most phonetically consistent scripts in the world and does not have any digraphs as the Serbian Latin script does (lj, nj, dž) nor letters with diacritical marks (č, ć, š, ž). Thanks to the unique characteristic of the Serbian language whereby a single sound is represented by a single letter, addresses on the .СРБ domain are unambiguously pronounced exactly as they are written, which is also very important for web searches as these are more and more often being performed using voice recognition.

.СРБ is the “natural Internet habitat” for content in the Serbian language and Cyrillic script, and the use of Cyrillic on the Internet (and in everyday life) is of great importance for the preservation of the national identity and unique ethnic traits of Serbia. Cyrillic is a ten centuries-old script in which much of value from Serbian literature and history has been written and which is of great importance for the preservation of the Serbian spiritual and cultural heritage. Globalisation, which leads many to believe that they will increase their chances of success in life if they speak one of the world’s popular languages, is leading to the extinction of some smaller languages. According to data from UNESCO, more than 200 languages have disappeared since 1950, and estimates say that of the 6,000-or-so languages currently spoken in the world, some 2,500 are under threat. The use of native languages and scripts online is one way to help many languages “survive” globalisation.

Which countries have a domain in their local script?

The first IDN ccTLDs were activated on 5th May 2010 for three countries using the Arabic script – Egypt, Saudi Arabia and the United Arab Emirates.

On 12th May 2010, Russia became the first country to register a domain in the Cyrillic script, with the extension .РФ. On 5th February 2011, Serbia became the second country to get its own Cyrillic domain – .СРБ. Subsequently, .УКР was delegated to Ukraine, .ҚАЗ to Kazakhstan and .МОН to Mongolia. Macedonia got its own Cyrillic domain, .МКД, in early 2014, as did Belorus the same year, while .БГ was allocated to Bulgaria at the beginning of 2016. In the meantime, the European Union domain got a Cyrillic version – .ЕЮ – but before that, interestingly, the old generic domains .ORG and .COM also got Cyrillic variants, .ОРГ and .КОМ. Apart from the aforementioned Cyrillic script ccTLDs, there are 17 national domains in the Arabic script, 13 in Indian scripts, 8 in Chinese scripts and one each in Greek, Armenian, Georgian and Korean scripts.