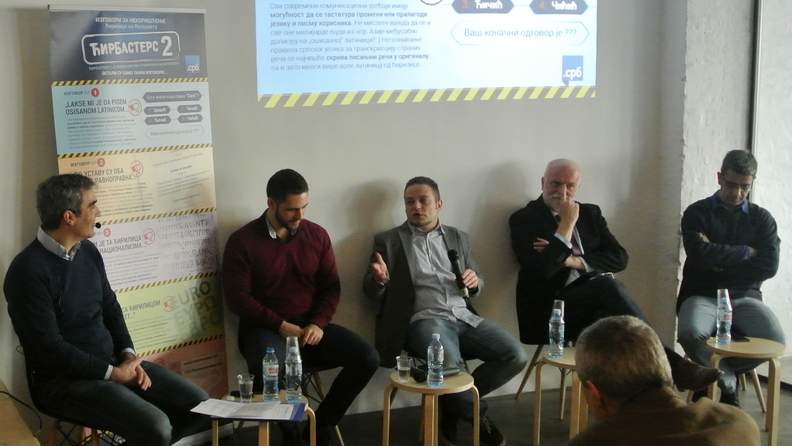 Use of the Cyrillic script in everyday communication – and therefore online too – is not, as some would have it, a nationalist statement, it is a sign of respect for one’s language, just as nations all around the world value their identity. This sentence summarises the Cyribusters 2 panel debate held 27th January at the Startit Center in Belgrade and organised by the Serbian National Internet Domain Registry (RNIDS).

The panel was held to mark the fifth anniversary of the Cyrillic .СРБ domain and was moderated by Aleksandar Gajšek, author and presenter of the Agape programme on Studio B television. Participants in the debate were Thiago Ferreira, marketing director of the Serbia4Youth organisation, Uroš Nedeljković, attorney and traveller, Vlado Đukanović, linguist, and Dušan Stojičević, chair of the Cyrillic Generation Panel at ICANN. They looked at the five most common excuses for non-use of the Cyrillic alphabet, which were in addition to the list of false myths about the use of the Serbian national script, addressed on the same day a year ago at the first Cyribusters event.

Thiago Ferreira is a Brazilian who came to Serbia for love five years ago. In that time he has learned to speak Serbia very well, and to use Cyrillic, which he thinks is “exotic”, but also unique, and he cannot understand why our people would disdain such an authentic feature. “If a Brazilian guy can learn and use Cyrillic then I can't understand why someone from this country would find it difficult to use it,” Ferreira remarked, in response to the first Cyrillic myth.

Use of “shorn” Latin script (Serbian Latin typed ‘lazily’, using only s, c, z etc. instead of with the special characters š, č, ž) cannot be justified by simplicity of use, agrees Vlado Đukanović, since it does not matter whether you are going to press “s” or “š”, you have to press a key one way or another. “The problem may be a lack of technical knowledge – for example many people do not know how to activate Cyrillic script on their smartphones. That is why it is important to educate people about the huge advances in technology that we are seeing, advances which even make it possible for software to recognise spoken Serbian and convert it to text,” he said.

“Cyrillic is no longer a bogeyman, Google and many other companies have adapted to the multicultural environment and now you can even write in English in Cyrillic and have the search engine find what you are looking for,” said Uroš Nedeljković, who finds Latin script “impractical” when writing large volumes of text because it has more letters than Cyrillic.

“Text written in ‘shorn’ Latin letters can sometimes be difficult to understand,” said Dušan Stojičević, concluding the discussion of this myth.

Excuse no. 2: “Both scripts are equal under the Constitution”

This is an urban legend and is not true – Article 10 of the Constitution of the Republic of Serbia states that the Cyrillic script is in official use in our country while the official use of other alphabets is to be regulated by law.

Asked why Cyrillic is sometimes not used even in official contexts, Uroš Nedeljković, attorney, answered that although the Constitution does envisage this there is no penalty for breach of this provision: “Because there is no penalty, nor incentive, anyone can do things how they want, and so out of a warped fear that they will be marked out as a nationalist, people use Latin script most of the time”.

The law needs to be additionally improved agreed Đukanović, since the arguments regarding this subject rest on the Law on the Official Use of Languages and Scripts, originally drafted in 1992 when we were part of another state. Also the institutions should take more care with the official use of Cyrillic.

Some countries go even further than imposing the script just on institutions – Russia for example insists that the logos of foreign companies operating in the country be in Cyrillic, points out Stojičević, citing the example of the photographs of the Cyrillic McDonalds logo that were shared around online some time ago.

Excuse no. 3: “Cyrillic to me is all about nationalism” 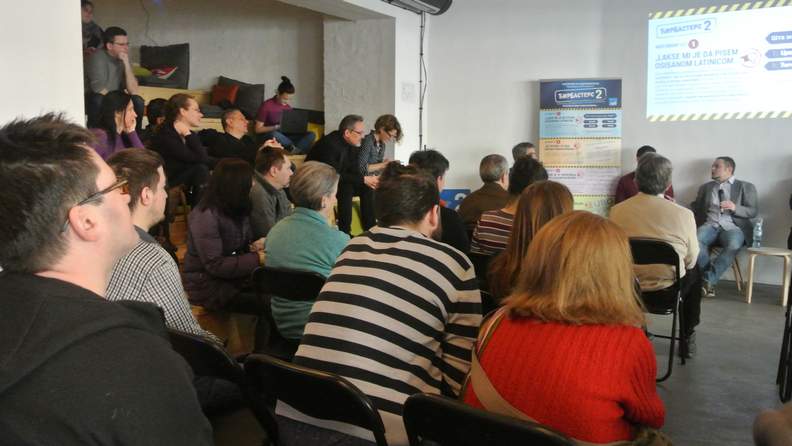 The proliferation of the Latin script in Serbia is not a result of the expansion of the Internet – it has much deeper roots in the opinion of Serbian linguist Vlado Đukanović, who reminded the audience that until the Second World War Cyrillic was in predominant use here. “However,” he said, “in the 1960s, when Yugoslavia became more open towards the West, new products began to come in, and with them new cultural patterns and values. That was when use of the Latin alphabet became a matter of prestige. This later got out of all proportion, and today every street food vendor sells burgeri even though we have an original Serbian word for this type of food – pljeskavica. Insisting on the use of proper Serbian language and script is not nationalism, it ought to be normal, and is in the interests of simpler and better communication.”

“If I can write Cyrillic as a Brazilian, then where is the Serbian nationalism in that?” wondered Ferreira, who through working and spending time with Brazilian tourists in Serbia has come to the conclusion that this alphabet could even bring commercial advantages, as foreigners like to have their picture taken in front of signs with exotic writing on them which they then share online.

Excuse no. 4: “We can’t access Europe and the world at large using Cyrillic”

If travel is one of the primary ways we make contact with foreign countries then the alphabet can also be looked at in the context of tourism. “Foreigners don’t care which script you use to write in Serbia, most of them do not understand Serbian regardless of whether it is in Latin or Cyrillic script,” said Uroš Nedeljković.

Of course, signage must be adapted for tourists but our national script must also be preserved alongside this, just as a great part of the developed world does it, the debate participants agreed.

As regards our place on the world stage, and especially our entry into the European Union, our membership of this community of states is not dependent on us giving up our alphabet. The Union respects national diversity and the alphabets of various peoples are even printed on the common currency – the euro – points out Đukanović, adding: “We have to be realistic, though. Although the Greeks and Bulgarians have their script printed on the euro, their states are not equal to the Germanies or Frances of this world. That’s the way it’s always been, and this claim cannot be used as an excuse to disavow the Cyrillic alphabet.”

Excuse no. 5: “But this Cyrillic of yours doesn’t work in emails”

“The greatest progress in the use of non-Latin letters on the Internet has been made in the area of domain names,” said Stojičević, noting that the .СРБ domain was working very well in our country. “There are still some problems relating to email addresses in other alphabets but this is being worked on and has been for some years. India, Russia and China have email addresses with the local scripts on both sides of the @ which even work outside local networks. We have email addresses working that use the Cyrillic script to the left of the @-sign, and our goal is to put a standard in place whereby the entire email address could be written in this alphabet. Everybody needs to take active part in this process – not only those from non-Latin using countries but also the recipients of these emails abroad, and that will take time,” said the chair of the ICANN Cyrillic Generation Panel, and added that we could expect a global solution to this problem in the near future.