The second day of the DIDS 2021 conference was devoted to the Regional TLD Forum. This event has been held as a side event to DIDS since 2015, and was held online this year for the first time. This year the event brought together 23 representatives from the national registries of Croatia, Slovenia, Montenegro and Serbia. It was held in a round-table format, at which representatives of national registries were able to share information and experiences in the areas of technology, law and marketing.

First the representatives of RNIDS, as the host of the event, presented their work on establishing a regional Anycast service, which they are working on with their colleagues from the Slovenian registry. There was also discussion of upgrading hardware infrastructure and working on bringing rulebooks up to date. The marketing representative presented the idea of the pitajte.rs project and the infographic as a mural, as well as interesting traffic statistics for the domen.rs site. 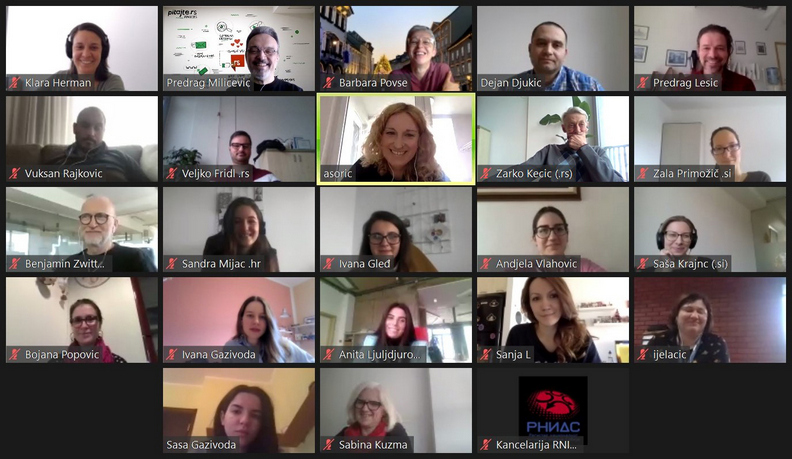 The Montenegrin registry has received a boost to its staffing and initiated some new projects. One of them is drop catching – they have introduced what is known as a drop zone, which is a one-hour window in which all their accredited registrars can access and register expired domain names at a higher price before they go on sale on the open market and can be registered by anyone. Other news of interest was the increase in the price of registrations of .me domains from 10 to 11 euros and the introduction of digital signatures when signing promotion agreements with their partners. Our colleagues from the registry expressed the concern that the unnatural growth rate of registrations caused by the pandemic would soon be followed by stagnation in the number of registered domains and are considering strategies for the further development of their business in such a scenario.

Our colleagues from the Slovene registry raised the ever-current topic of responsibility for malicious content on the Internet. Their policy, if there is a problem with any web content (a fake online store, for example), is to only address issues with the domain name, not with the site contents. In the event of phishing or malware content they inform the CERT. As regards their ongoing activities, they mentioned increasing security and harmonising with the EU’s NIS Directive, as well as Netko, a project to promote websites on the .si TLD.

The Croatian registry takes the same view as the Slovenian as regards online content, and they are also in the process of aligning themselves with the requirements of the NIS Directive. Similar to the Montenegrin registry, CARNET too has stepped up its use of digital signatures. In addition they shared their experiences with breaches of contract by accredited registrars and the action they take in such cases. This example provoked an interesting discussion amongst the representatives of the registries and an exchange of experiences regarding rules and practices that they apply.

The meeting ended with all those attending expressing the hope that the next would be held live in Belgrade, as no web app could replace a handshake and genuine hug.